Each “Faith Heroines Alive” monologue brings a special guest to an audience, a woman of faith who has a testimony of God’s power and goodness as shown in her own life experiences.

As you consider inviting Susie to speak for your event or group meeting, you may want to read the following descriptions of the faith heroines she portrays.  The monologues are about 40 minutes long but can be shortened or lengthened depending upon the needs of the audience.  Stories can also be divided into daily portions to be delivered as an exciting serial story at a church camp or VBS or Sunday School series for adults or children.

Here then, for your perusal, are descriptions of the true heroines of the faith portrayed by Susie Tucker Boer.

Corrie Ten Boom was a watchmaker in the Netherlands when Nazi Germany invaded.  Her family sheltered Jews and members of the Dutch underground in a “hiding place” in their home.  Eventually the operation was discovered and the family sent to concentration camps.  Upon her release Corrie became a “Tramp for the Lord”, preaching a message of faith and forgiveness around the world. 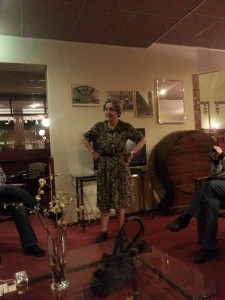 Darlene Deibler Rose was a missionary to New Guinea when WW II broke out.  She spent the war in a Japanese prison camp.  Her trials and her eventual return home to the United States were told in her book Evidence Not Seen.  Darlene’s faith sustained her through time on death row and through the loss of her husband and everything else she possessed. 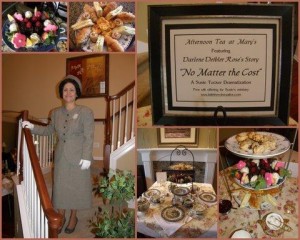 Faith Heroines Alive monologues are perfect for all events and audiences, but seem particularly appropriate for women’s brunches and teas.  Here Susie as Darlene Rose wears a late 1940’s suit to match the era in which she first told of her traumatic experiences as a WW2 prisoner of war.

Gladys Aylward was a young English parlormaid determined to serve as a missionary in China.  She overcame many obstacles to get there, and became a strong witness of Jesus, even converting the Mandarin of the province.  When war broke out, she continued to serve as a missionary and at one point rescued 100 children by leading them on foot across a mountain range to safe refuge. 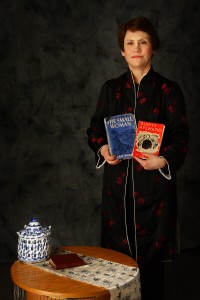 Faith Heroines Alive monologues are based on extensive research into the lives of the real person, reading every biography and listening to recordings of actual sermons or talks given.  Gladys Aylward was propelled to fame when a BBC reported first heard her testimony of rescuing children and wrote The Small Woman.  The movie “The Inn of the Sixth Happiness” was based on this book.

Ida Scudder was born into a family of medical missionaries to India, but her early childhood memories of famine and death in India convinced her that she wanted to live her life in the happier healthier United States. Then during one night in India, three separate men came seeking medical help for each one’s wife who was experiencing difficulties in childbirth. They would not let Ida’s father, an MD, help because he was male, and Ida couldn’t help because she had no training.  All three of the Indian women died that night, and Ida Scudder’s life ambition changed.  She went on to graduate from medical school at Cornell University and returned to India on January 1, 1900, determined to make a difference and model the love of Christ in doing so. 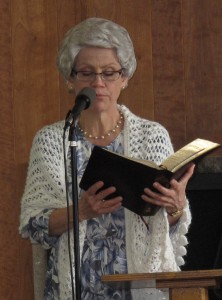 Betty Ann Olsen was a young vivacious nurse serving as a medical missionary in Ban Me Thuot in South Vietnam during the 1960’s.   In spite of the dangers of working in a war zone, she and her co-workers dedicated their lives to bringing the gospel and health to the tribal communities in Vietnam.  In January 1968, the Viet Cong launched the Tet offensive.  The missionary settlementat Ban Me Thuot  was destroyed and several missionaries killed.  Betty and another missionary and a humanitarian aid worker were captured.  Only the aid worker survived the captivity but during that time he became a Christian from the time he spent with his fellow captives.  Betty’s story is only known because of the one who survived.  Her story is told in the book, “No Time for Tombstones”.  In a “Faith Heroines Alive” presentation, Susie Tucker takes you into the jungle of Vietnam where you hear Betty as she remembers her story.  Audiences are moved as Betty realizes that there is perfect peace at the center of God’s will. 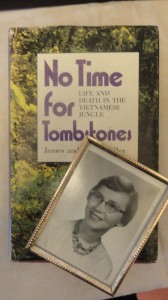 Betty Ann’s father and stepmother prayed for 5 years for their missing missionary daughter.  Betty’s stepmother gave Susie access to all the articles, letters, photographs that dated from that era in their lives.  Betty’s father Walter Olsen wore holes in his bathrobe where his knees rubbed the floor as he prayed beside his bed.  This testimony/monologue is sad but powerful.

Dr. Margaret Brand went to India with her husband Dr. Paul Brand to serve as medical missionaries at the Christian Medical Center in Vellore. Margaret’s specialty was pediatrics, but she met an emergency need in the eye department and went on to become the world’s foremost expert in the treatment of eye disease for those suffering from leprosy. At the same time she was busy raising six children and supporting her husband who was also involved in groundbreaking discoveries regarding treatment of leprosy. Dr. Margaret’s story is a cheerful inspiring account of a woman who gave herself completely to God and let Him lead. The theme of her message is “You can’t outgive God”. 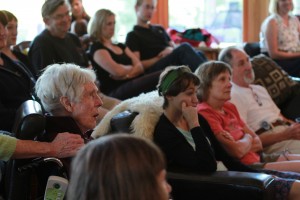 The photograph shows Dr. Brand surrounded by her family members as they listen to Susie perform the Faith Heroines Alive monologue based on Margaret’s life.

Lilias Trotter was inspired in late 19th century England by the missionary meetings done by Dwight L. Moody and Hannah Whiteall Smith.  The desire to know her Heavenly Father in a deeper way had been given her as a response to losing her much loved earthly father when she was 13 years old.  Lilias began her Christian ministry helping the lower class girls who came to London searching for work and a safe place to live.  On a trip to Venice with her mother, Lilias was introduced to one of Europe’s most famous art critics and philosophers, John Ruskin.  Mr. Ruskin, previous to meeting Lilias, believed that woman could never achieve excellence in art.  After meeting Lilias, he wanted more than anything to train her into one of the world’s outstanding impressionists.  He pressured her to give up her Christian benevolent work so that she could fully concentrate on her art.  Lilias was torn, but felt “the love that was stronger” calling her to serve God even more fully.  She and two other women moved to Algiers and began a lifelong work ministering to the Muslim population.  Lilias’ story is told in the setting of her home, where as an aged missionary, she speaks to visiting younger missionaries, encouraging them to persevere through the obstacles and trust that God is working and that the seeds planted will spring forth into bloom at God’s perfect time. 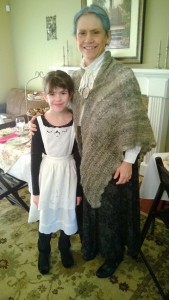 Faith Heroine stories are enjoyed by children and adults.  Stories will be adapted to fit the maturity level of the audience.  Here, Susie as Lilias appreciates a young tea server.

“Brother Andrew” was the name used by the smuggler of Bibles and Bible tracts behind the Iron Curtain, made famous in the book God’s Smuggler, by John and Elizabeth Sherrill.  Andrew began his work in the 1950’s, filling his blue Volkswagen with material hidden in the folds of his packed clothing.  He daringly entered Communist countries.  As the years went on, his ministry became the foundation for Open Doors, which continues to work in gospel outreach to closed countries.  In Susie’s presentation, she becomes Andrew’s wife, and tells the story of how Andrew grew up in Holland.  He was a cocky mischievous child and he did not take God or religion seriously.  Only through the trials of serving in the Dutch army trying to maintain colonial control over Indonesia did Andrew discover his need for God.  Andrew’s wife tells his story with great tenderness and emphasizes how God has plans even for those who are trying to run away from him.

The Shepherdess on the first Christmas

In the 2nd chapter of Luke, the well-known Christmas story tells how angels appeared to the shepherds during the night.  The shepherds were terrified, but the angels reassured them. They brought great news that a Savior had been born that very night in Bethlehem.  The shepherds went to find the baby, and after leaving the manger, they told everyone they met what had happened to them.  In Susie’s monologue, she represents one shepherdess (Susanna) who was on the hills that night.  In the monologue, Susanna has leaned up against the wall of a home to rest, after having been through the most incredible night and day of her life.  She is invited in to the home to get warm. She finds that the family has a sick daughter, so the parents have not left her side all day.  They do not know anything about the event that the shepherds experienced.  The shepherdess explains in great detail to the listening family what it means to be a shepherdess, and how sorry for herself she often felt.  Then she tells how the previous night, the angels lit up the sky.  She explains how the shepherds found the baby wrapped in swaddling cloths.  It is a moving portrayal of a woman who felt unworthy and yet was given such a privilege, to be called to see the new baby who was the promised Messiah.  The only hard part for her was that when she saw the baby, she saw how perfect he was.  It reminds her of the pain she feels every time she sees a perfect lamb, knowing that this will be the lamb used for the sacrifice.  As the little girl listens intently to the story, she sits up with excitement.  It ends as Susanna tells the parents to take her to go find the baby.  She reminds them that the angel said this was good news for all people! The monologue is a moving Christmas story told from a different perspective and is a great part of a Christmas program for churches, Bible studies, or other groups, large and small.

Susie continues to bring faith heroines to life during the era of Covid. She will follow all the guidelines you ask for in wearing of masks or social distancing. For information on attending any of the upcoming performances, or to book a performance, please contact Susie using her